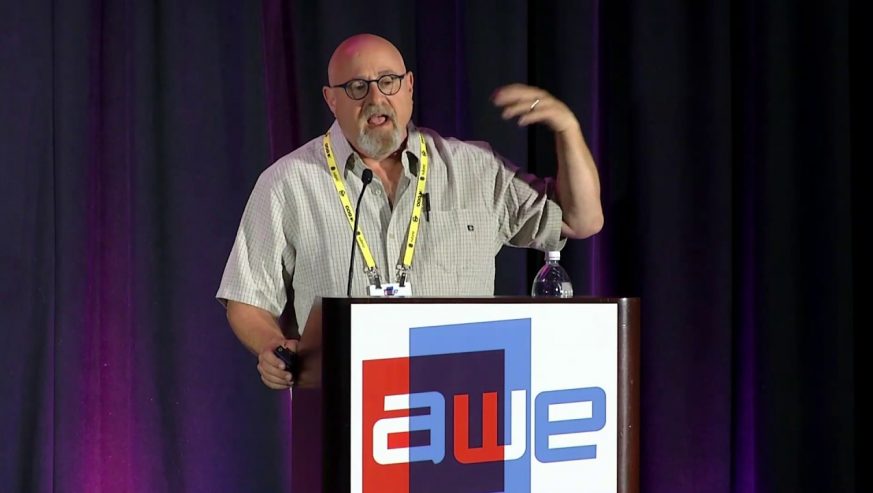 Charlie Fink a former tech executive, with a really impressive career, his past achievements include working for Disney, AOL and AG Interactive, and he’s currently the AR/VR contributor at Forbes. Charlie has also recently released a book entitled ‘Charlie Fink’s Metaverse, An AR Enabled Guide to VR & AR’ – which is a continually updated guide to AR and VR, the book features original character animation, presented through the free app, “Fink Metaverse”.

Hey Charlie, so tell me, what is the most intriguing thing that you discovered recently?
The two things that I am thinking about a lot are 1) micro-displays; the AR cloud, the world being plagued with data which I believe is incredibly important; and 2) when headset do come it will be the more important, because the headset has to see something and computer vision is not quite as developed as it needs to be for wearables.

What are your thoughts about the education of new media technologies in schools…
Education and medicine are probably the two areas that can benefit the most from virtual and augmented reality; yet they would be the slowest to adopt it. I think it’s easier in private schools which have more flexibility. But, it depends on the faculty having enough time, it’s not going to happen overnight.

Everybody wants to activate a relationship with a customer that is beyond product and more oriented towards their brand.

Do you think that within a few years everyone will have a VR headset?
No. First of all, people do not like wearing things on their head. Second of all, the things that are out there tend to come in two flavors right now. One is some form of social VR, and that is just not for everyone, and games.

Fast track to the future, will we be spending more time in the virtual world?
Mobile Augmented Reality is happening; AR is hot right now, because everyone has a smartphone capable of doing augmented reality, mobile AR is going to lead the way.

The next five years are going to be quite amazing in in terms of development of AR, yet the machine we use is going to be thing that we are already doing, we already have on our hands.

Tell me what you envision for the development for AR…
Every app on your phone is going to use AR, the next stages are called stand alones which are untethered headsets and have a computing power on board, inside the headset and that would be less cost and easier to use. You just put on a headset and you’re in VR, I expect this year millions of these to be sold. Also, AR with social media with video has become an extremely popular activity among younger users and younger demographics. The next five years are going to be quite amazing in in terms of development of AR, yet the machine we use is going to be thing that we are already doing, we already have on our hands. Personal computer was hard, because you had to convince people to do something they have never done; that was hard. Convincing people to use a smartphone instead of a flip-phone was easy.

Brands and VR – tell me your thoughts on the opportunities?
Well, again, it’s like with the internet: you put your toe in, then you put your foot in. But they [brands] try not to get too ahead of themselves except for very specific circumstances when they are trying to activate influencers. But the world will be driven by data, a simple object like a book or a car will act as triggers for data, then data will be geo-located, that would be the other way that people find data. I believe brands are going to play a big part of that, but, again, it is a little early.

Are we waiting for technology to catchup with the ideas? You know, they’re kind of either mixed together, a lot of this thinking is coming from people who work on the process of creating the technology. There is a stack of technologies that has to work together to make a head-mounted or wearable world. We have been really hung up on the optical system, but I think sound is going to play a bigger role. People are starting to understand that there two ways into the brain, one of them is really hard, that’s optical system; one of them is easy, that is sound.

How easy do you think it will be in terms of convincing?
I think it will start with a very specific group and slowly expand to influencers. But people over 50 are not going be doing this nor do they need. It takes a specific person to learn, but they tend to be younger, and tech savvy, and more curious. That’s how it starts. That’s who was using bulletin boards before the internet.

Five years from now…tell me about the space…
Everything you do on your phone will have something to do with augmented reality. That is a for sure, VR will hit some type of inflection point with wearables. The world will be filled with data and you will be able to access that data with your mobile phone. There will be wearable, more people would be doing VR at work, because VR does have some potential killer apps for the workplace which is good for VR. That’s, again, how the PC developed, they used it at work and then they decided they couldn’t stand not having one at home. So, I accept VR & AR follow that pattern.

The Best Of VRLA