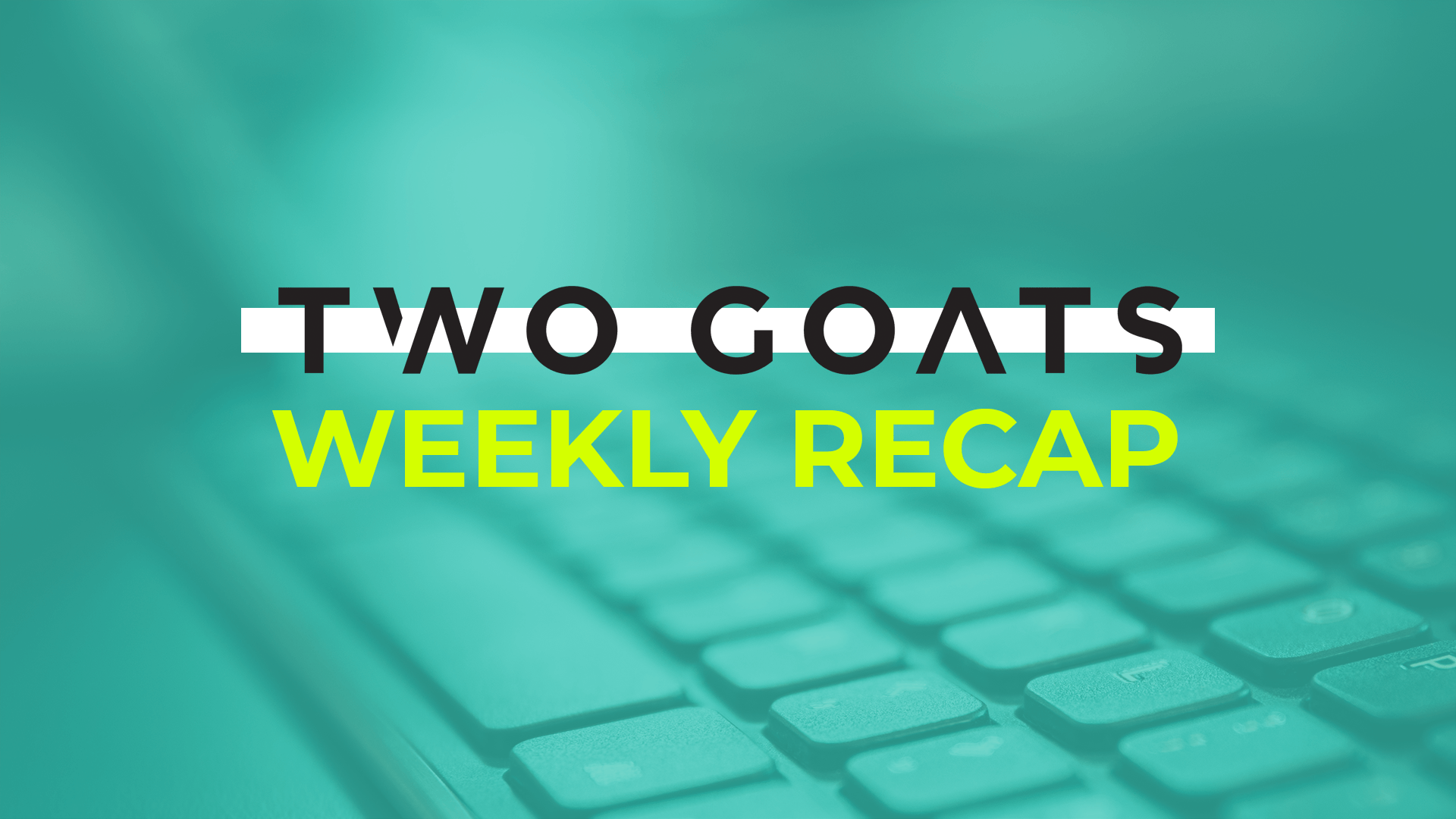 This week the new Vive Cosmos headset grabbed headlines. We visit the intersection of immersive technology and fashion, talk Coca Cola AR activations, and highlight some crucial storytelling about the Amazon by TIME Immersive.

HTC’s highly anticipated Vive Cosmos VR headset launched this week at a starting price of $699. The headset still needs to be tethered to something – but the computing source is more versatile than ever before. You can connect it to your PC, smartphone, or even use a wireless adapter to play without a cable dragging at your feet. It boasts excellent screen resolution, new and improved Oculus-like controllers, and very customizable faceplates for comfort and utility. The headset is also equipped with six inside-out cameras which make for distinguished tracking and RGB cameras that enable mixed reality experiences — that’s more than Oculus Rift S can say at this point. Even the in-headset experience is improved, with HTC’s new Vive Reality System (replacing SteamVR) dashboard. It doesn’t blow any other consumer headsets out of the water in any particular category, but markets itself as an all-around versatile and premium device.

TG Takeaway: The consumer VR market continues to take form with substantial competition: Cosmos is a direct competitor to Oculus’ new Rift S and the Valve Index. The choice to keep the headset tethered to something may hinder its consumer viability, as well as a price tag higher than Oculus products and no particular distinguishing strength. But the versatile, customizable hardware justifies the price tag: for VR power users and institutions alike, the Vive Focus is a compelling option.

Big technology companies are converging upon a concept known as the AR Cloud — where digital AR information persists in specific physical locations, visible for shared experiences through any device. Google rolled out Persistent Cloud Anchors for private viewing this week, so apps like MarkAR (pictured) can leverage it. When you create AR art and place in in the real world, it remains. “We see this as enabling a ‘save button’ for AR, so that digital information overlaid on top of the real world can be experienced at any time. Imagine… leaving AR notes for your friends around an amusement park… or hiding AR objects at specific places around the world to be discovered by others,” wrote Google augmented reality product manager Christina Tong.

TG Takeaway: Google’s focus on Cloud Anchors parallels Microsoft’s Azure Spatial Anchors and Magic Leap’s notion of a Magicverse. Digital content is soon to be everywhere you look — through your cellphone today and augmented smartglasses tomorrow. Snapchat’s Landmarker filters, which allow you to build AR that stays superimposed onto worldwide landmarks, belong to the same category. Cloud Anchors also speak to the multi-user shared experiences that AR permits for entertainment, lifestyle, and retail brands.

Tommy Hilfiger has been quietly innovating in virtual reality and e-commerce: his latest project live-streamed the September 8th fashion show from the Apollo in Harlem as a virtual reality experience accessible on web. WebVR is a notable choice for its accessibility: it appeals to the lowest common denominator of hardware necessity; you need only a mobile or computer browser to access the behind the scene, red carpet content. After the show concluded, the WebVR experience remains on tommy.com. Customers navigate between virtual scenes with tap-able hotspots, and drag around the 360 fashion scene to buy the featured products right then and there.

Check out the newest YouTube content aggregator: /fashion brings together videos from creators, livestreams of runway shows, a beauty section, and collaborations with fashion brands. This new channel will be huge for distributing AR makeup try-ons and fashion experiences built for the YouTube platform.

Coca Cola was busy working on AR experiences this month: Coke released cans equipped with unique codes that, when scanned, trigger one of twelve fun augmented reality stories. Each immersive story focuses on a conflict ending with the two animated characters sharing a Coke. In the Fanta experience, scan a Snapchat code on one of the fruity soda’s posters and unlock shareable AR filters and sticker packs. The multichannel “It’s A Thing” campaign also includes custom Instagram “finstas” with personalities for their brand characters and 2D videos called Flavor Stories (below).

TG Takeaway: These out-of-home ads like Fanta’s encourage consumers to visit physical locations and play with the physical product — they trigger extensive engagement and fun through mobile devices. All CPG companies can experiment with this kind of marketing activation and see how engagement increases with a simple QR or Snapcode on the back. The QR Code renaissance is upon us!

Burger King is back with more AR trolling of McDonald’s

The “Escape the Clown” experience, designed to hype the release of IT Chapter Two, is a sneaky, gamified ad campaign. When users (exclusive to Germany) are at McDonald’s, they can find an AR-enabled BK advertisement in the brand’s cinema-themed magazine. When scanned, it triggers a time-based 3D balloon game, gives directions to the nearest Burger King, and if the user visits the location in a certain amount of time, they get a coupon for a Whopper.

TG Takeaway: We can always count on Burger King for some of the most creative AR activations — in the wake of their “Burn that Ad” campaign in Brazil, this project in Germany is a great example of gamified, reward-based advertising. Still, you need to download the MyBK app to experience it.

TIME Immersive’s second major AR experience, “Inside the Amazon: the Dying Forest,” follows its Apollo 11 activation last month. The experiences sheds light on indigenous tribes and their struggle to halt the encroachment of illegal logging. The project is narrated by Jane Goodall — and does a tremendous job of depicting the scaled visuals (with incredible drone photogrammetry), necessary to express the disastrous reality in the Amazon. From a technical standpoint, it unifies with other aspects of the multimedia reporting via hotspots featuring photos and videos. It is accessible via the TIME Immersive app for iPhone and Android.

TG Takeway: This TIME piece is an amazing use case of AR storytelling and a vital one at that — the dire situation in the Amazon necessitates maximum coverage and creative, visual reporting to assert the urgency of the issue. 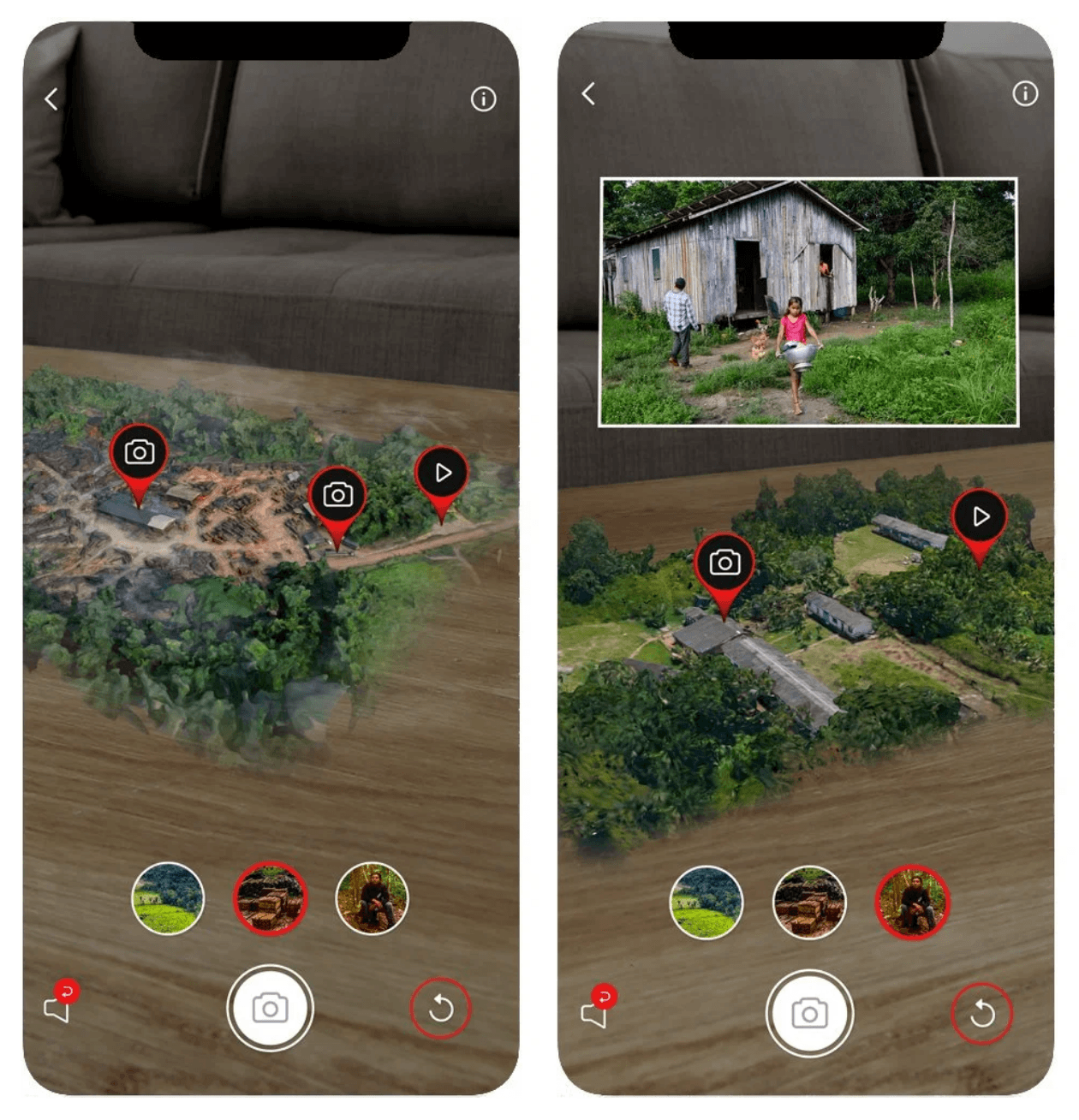 The game takes place in the early events of the HBO show’s second season. As a player, you embody one of the Hosts, Kate, who is continuously hunted by another Host. The experience is uncomfortable, writes an UploadVR reporter, as an old man eyes you up and down in the first of five chapters. Then it starts to become harrowing. As you solve puzzles to avoid the pursuing host, you also experience scenes full of bloodshed and gore. The game truly puts users in the universe of the show, so deserves praise for its raw narrative immersion. The videos and audio are stunning, writes the reporter, and the gameplay is a tad repetitive but its short run time solves for that issue. Available for $29.99 on Steam, Oculus Home, and Viveport.

TG Takeaway: Entertainment companion pieces in VR continue to excellent attemtps for onboarding new VR users. The audience of fans can’t help but wonder the perspective of one of the Hosts. Entertainment companies can think about how VR might appeal to a huge crop of fans who want to immerse themselves in the fictional universe. 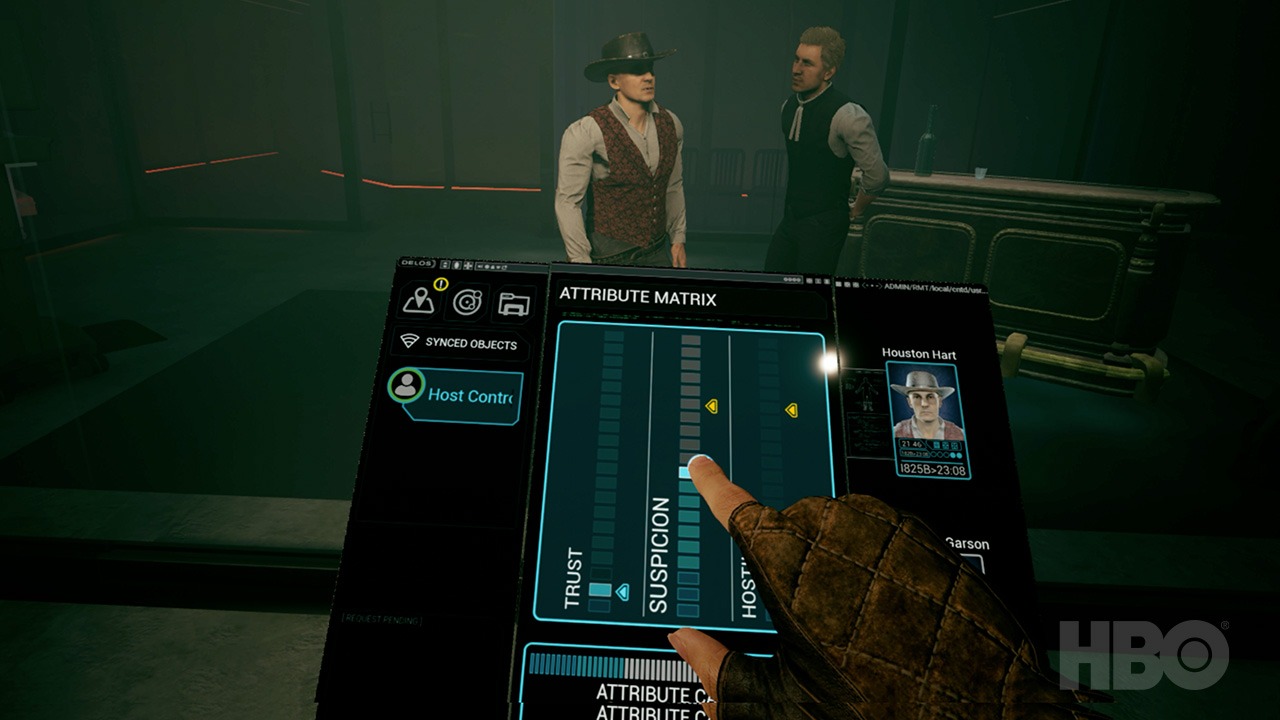 “Colorful overlays will track athletes’ speed during the 2020 Tokyo Olympics,” The Verge

“Augmented reality is reaching a mature state according to Gartner,” Skarred Ghost

“Will virtual reality and AI help us to find love or make us lonelier?” Financial Times

“Data Point of the Week: Half a Million Snapchats Lenses,” AR Insider